View source
watch 01:54
Arcane: League of Legends - The Loop
Do you like this video?
Play Sound

Mandalorian is a Star Wars Series Outfit in Fortnite: Battle Royale that could be unlocked by reaching Level 1 of the Chapter 2: Season 5 Battle Pass.

Although his Outfit was unlocked at Level 1 by purchasing the Battle Pass, His Beskar armor could be unlocked with quests going from Level 1 to Level 100. Once the player reached Level 100, all Beskar quests were available, which therefore allowed players to unlock his full Beskar armor.

The Mandalorian was a boss at Kit's Cantina (formerly in Razor Crest) during Chapter 2: Season 5.

When eliminated, the Mandalorian dropped these Mythic items:

He used an unobtainable E-11 Blaster Rifle for close range.

The Mandalorian can be found as a boss in Mando's Bounty LTM.

When he sees a player from the #1 team, or the #1 player he will attack them with his weapons. If eliminated, he will drop these Mythic items: 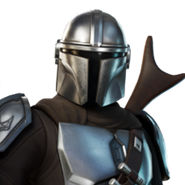 Mando and The Child near The Zero Point. 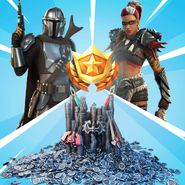