Midas is a Legendary Outfit in Fortnite: Battle Royale that could be obtained at Level 100 of the Chapter 2: Season 2 Battle Pass. He is part of the Golden Ghost Set.

Midas is based on the Greek myth about a king of the same name, who turned everything he touched into gold.

The Midas outfit has a golden touch feature that turns weapons and vehicles to gold for the rest of the match, even when other players pick it up. Midas’s gold touch mechanism can turn any weapon or vehicle (except cars, saucers, and the Kymera Ray Gun) gold, and they will remain like that for the rest of the match, even if dropped. This ability was also carried onto Midsummer Midas and his female counterpart Marigold.

This Page/Section is about an item or concept that has been removed from the game.

GHOST Henchmen (before The Device)

Midas was a boss at The Agency during Chapter 2: Season 2.

The Device
The Agency
The Yacht
The First Shadows
Cuddle Cruisers

Before the days of SHADOW, Midas set his sights on building an empire of espionage, intrigue, and conquest. For this he recruited three people with great potential : The Burning Wolf, Chaos Origins and Sierra to make them his first three Shadow operatives, together they form The First Shadows. Midas' original three operatives are respectively nicknamed Midas' first enforcer, Midas' first redeemed, and Midas' first pardoned.

In a picture in Doctor Slone's office in Corny Complex, a picture of Slone revealing her genius talents to the IO can be shown. In particular, a silhouette strongly resembling Midas (by the clothes and hair) can be seen, hinting he was maybe previously part of the Imagined Order before his arrival in the Loop. That can also explain Midas' mastermind capabilities and how he knows so much about the Island.

Midas also has a unique history prior to even building an empire of espionage, intrigue, and conquest (how he lost his eye, how he got the golden touch, what his true backstory is), but much of it remains to be unrevealed for now.

Midas selects Eye Land for his new base, likely being aware of the Zero Point stationed underneath there. Before he takes over Eye Land and transforms into the Agency, he touched several items and furniture in the houses, turning them into gold and leaving behind a GHOST folder on the golden toilet. His golden hand also appears in several trailers for Chapter 2: Season 2. This season is most possibly the time period that takes place when Midas recruits members for SHADOW before GHOST came about.

Midas could be found as a boss at the Agency, the headquarters of GHOST and was the leader of all other main agents of the season: Brutus, TNTina, Skye, Maya, Agent Peely, Deadpool and his pet Meowscles. It can also be presumed he owned all other Spy Bases on the map, and The Yacht was his own personal yacht, as it contained a statue of himself. He was heavily guarded by GHOST Henchmen and could be defeated. Like all bosses, he had his own unique drops: his drum gun and the Agency Keycard - which could be used to unlock the vault. Inside the vault laid a fountain of loot.

In Midas' cutscene and room, several golden heads of characters from the Island could be seen, and a few statues of characters could be seen and Midas was seen having defeated the Black Knight and placing his golden helmet on his wall. Interestingly enough, Chaos Agent's mask was on the wall, which leaves many questions as to the fate of SHADOW.

Throughout the season, he slowly worked on a Device alongside his daughter Jules to destroy The Storm which was spotted in his room, directly underneath the Agency and possibly right above the Zero Point. In his room, a journal containing a drawing of Oro's scepter was there, possibly meaning that his golden touch has something to do with Oro and his scepter. A suit similar to that of Tempest's was also spotted in the room. The suit was later used by Midas to harness the power of the Storm and become a new snapshot, Cyclo. Countdowns for the activation of his Device also appeared in the Agency and in his own room. When his device activated on June 15, 2020, his voice and several other henchmen's voices could be heard. Midas successfully rose the Device up from his underground base. The Device's plan, unfortunately, failed, turning the Storm into a giant Wall of Water. While trying to repel the storm, the loop destabilized several times. However, during the event, files of him, Jules, and Lynx were spotted on Agent Jones' office, meaning that they had been investigating him for a while.

After the Device live event, Midas shows his affiliation with SHADOW (it is later revealed that he is the founder as well as the true leader of SHADOW), he likely handed over the The Agency to Jules to turn into SHADOW's new HQ.

When Chapter 2 Season 3 began, the giant Wall of Water created by Midas collapsed, flooding the entire Island. In Chapter 2: Season 3 trailer, a snapshot of him was eaten by a Loot Shark. He doesn't appear during this season and GHOST continued to operate with Ocean at The Fortilla.

Close to the end of Chapter 2: Season 4, Midas who was killed attempted to take back the eye of the island. Prior to Halloween 2020, his golden chair mysteriously appeared in The Authority. After a ritual with it was performed, Midas was "resurrected". He as Shadow Midas, in the Midas' Revenge event. He appeared as a boss in the Ruins of the Authority with his own Drum Gun. Shadow Midas successfully managed to "hack" the reboot system and Loop and got rid of Reboot Cards. He also made it so that when Loopers were eliminated, they returned once more as a Shadow, creating his own army of Shadows. His plan would eventually fail and Galactus destroyed The Ruins and the eye of the island by exposing the Zero Point.

Marigold arrived on the Island. Just like Midas, she is cursed with the Golden Touch. In her quests, she mentions that someone is "spending Midas' gold" and her pickaxe description mentions that her daggers are a treasured gift from Midas, hinting they have a positive relationship with each other. This is further evidenced by how The Yacht was named "Marigold", linking the connection between the two even further.

Jules' NPC description reveals Jules is Midas' daughter and that he had been "an international crime boss". Jules also appears as: Scrapknight Jules, she wears armor similar to that of Midas Rex with the logo of the Imagined Order on her cape.

He is also seen in Batman/Fortnite: Zero Point Issue 1 fighting Batman. In Issue 2, he can be seen with many others observing the fight between Batman and Snake Eyes. In Issue 4, Renegade Raider mentions The Agency and how it was built by "powerful beings with vast resources" and the Device event was also shown.

The Marigold NPC, seems to be in on a plan, with Midas and Jules, as she asks for a getaway driver, she also tells them to stick to the plan, stating that something is going to happen soon involving him and Midas Rex.

For Cosmic Summer, Midas made his reappearance as Midsummer Midas, his clothes and accessories showing that Midas is a member of GHOST.

During Operation: Sky Fire his chair, golden Peely statue and gold bars from The Hideout can be seen in The Mothership.

Midas' original three operatives reappear after being hidden for a long time. Midas narrates the first animated comic series for the Fortnite Crew, this being for The Burning Wolf. The Burning Wolf Trailer also reveals that Midas is in fact the one who formed SHADOW Midas is shown once again as SHADOW in the Chaos Origins trailer, this time with SHADOW Henchmen by his side at Hydro 16. However, it is difficult to know when the events of this trailer take place.

Many traces of Midas whearabouts can be found on the island. The golden items in Cuddle Cruisers restaurant, The golden pillows at The Joneses and the secret hideout inside the walls of Covert Cavern with the golden llama. Golden Look Board's description suggests that he is watching from the shadows.

Promo in the News Tab

One of his collection 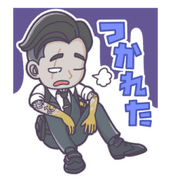