This article refers to the standard enemies in Save the World, if you are looking for Mist Monsters, see the linked article.

Monsters, more commonly known as Husks are the main enemies in Fortnite: Save the World. There are up to 6 different variations with different attack and defensive styles. Some inflicted by an element, and or others from a Mutant Storm. 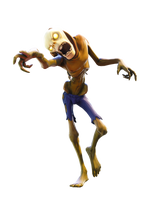 Standard Husks are the most basic type of enemy. They have no ranged attack and will attack the objective, structures and the player. Husks are found in almost every mission, as they are the standard enemy in the game. Their only attack is a melee, with no ranged attack or movement abilities. Their appearance is that of a standard survivor, with the skin around their head removed to show their skull. They do not wear a shirt, but still have blue cut pants.

Beehive Husks are similar to standard husks, but they have a beehive on their head. The hive creates a trail of bees behind the husk which deals damage to players. The trail disappears after a short amount of time. The hive can be destroyed off of the husk to create a Standard Husk. Their appearance is identical to the standard husk, but with a beehive on their head.

Husklings are smaller versions of the standard husks and have a similar appearance with the difference being their size. Husklings have a smaller hitbox, are faster, and also have a long ranged jump attack. Due to their size and speed, they have less health than a Standard Husk.Their appearance is identical to the standard husk, but much smaller, possibly a child.

Huskies are very similar to standard husks, but with more health, dealing more damage, and are slower. They have the same lack of ranged attack and also attack the same things. They appear as overweight, potentially African-Americans, with the skin on their head removed and behind their neck. They wear a white t-shirt.

Riot Huskies are similar to standard Huskies, but carry a shield, which is a refrigerator door. The Shield blocks damage, as well as piercing effects. The only way to damage a Shield Husky is to attack it from the side or behind, as well as damaging it through the very small opening in the shield. They appear very similar to the standard Huskies, but with a blue t-shirt and a ski mask.

Sploder Huskies are similar to standard Huskies, except they carry a propane tank. This tank is thrown by the Husky towards a structure, dealing massive damage to the surrounding area. The tank however, can be destroyed by shooting it before the Husky throws it, setting it alight and damaging the Husky and other surrounding enemies. Once they have thrown the propane tank, they behave identically to regular Huskies. They appear very similar to the standard Huskies, but with a red t-shirt.

Lobbers are husks that stand far from the objective and deal ranged damage to structures. This damage can also hurt the player, but these husks will not target them. If they end up at close range, they will still use a ranged attack. The skull they launch towards the objective can be shot prematurely to prevent it damaging structures. They appear as an older, slim woman, with a green dress. 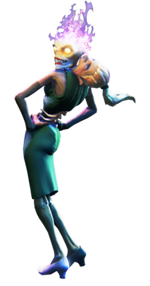 Beehive Lobbers are similar to standard lobbers, but instead of throwing a skull, they throw a beehive. Beehives produce a small cloud of damaging bees which hurt the player if they go near it. The hives can be destroyed in the same way as the skulls, but also destroyed on the ground.

Pitchers are ranged husks that throw a bone towards the player which can damage them, and structures. The bone moves slowly and can be easily dodged. If you are close to a Pitcher, it will damage you with a melee attack similar to a Standard Husk. Pitchers appear as a baseball pitcher, but in Hexylvania zones, have a brown outfit with a newsboy cap.

Zapper Husks are ranged husks similar to Pitchers, which use a hitscan attack against the player to deal damage to them. They are very accurate, but have a short charge up time which can be dodged if the player moves behind a structure. They appear as either a Cowboy, with a revolver, or a spaceman with a blaster.

Nurses are husks which have a large healing aura surrounding them. This aura heals nearby husks and themselves. They deal melee damage like any other husk, but will not attempt to attack the player. Nurses appear as regular husks, but female and with a white nurse uniform.

Retrieved from "https://fortnite.fandom.com/wiki/Monsters?oldid=168357"
Community content is available under CC-BY-SA unless otherwise noted.