This Item / Cosmetic is one of many Collaborations between Fortnite and another media property.

The media represented in this page has been created by a third party.

Mystique is a Marvel Series Outfit in Fortnite: Battle Royale, that could be unlocked at Level 80 of the Chapter 2: Season 4 Battle Pass. She is part of the Mystique Set.

Mystique is from Earth 616 and is a mutant. Due to her mutation, she is able to shapeshift into almost anyone. She also has superhuman durability and aging. Mystique is a mutant spy and shapechanger, capable of impersonating anyone. Originally a Ms. Marvel villain, she then became a classic foe of the X-Men during the 1980s. Later on she was one of the Marvel villains who got recast as anti-heroes. Mystique can be anyone, even in Fortnite using her emote Shapeshifter, has extremely versatile powers and skills, and has been around for a very long time.


Reach Level 86 in the Battle Pass


Stage 3 of 3 - Emote as Mystique after eliminating an opponent 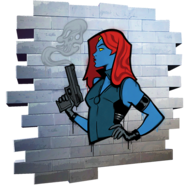