Tier 47 of the Season 8 Battle Pass

Peely is an Epic Outfit in Fortnite: Battle Royale, that could be unlocked at Tier 47 of the Season 8 Battle Pass. He is part of the Banana Bunch Set.

The outfit is most likely based on the banana from the "It's Peanut Butter Jelly Time!" trend. It's reactive feature is similar to a real-life banana which he starts out green, and ripens overtime to change to yellow. He was so popular that in Season 9, he owned his own Banana Store in Neo Tilted. Peely was an instant hit with Fortnite players, gaining many other outfit variants like P-1000, Peely Bone, Agent Peely, Unpeely. and Potaissus Peels. 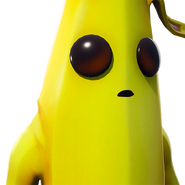 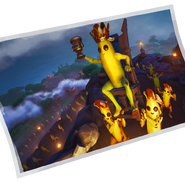