For the article on the class, please see Pistols (Battle Royale)

The Pistol is a Pistol in Fortnite: Battle Royale. It was added in Season 0 alongside the Battle Royale game mode.

The Pistol is a semi automatic, high fire-rate cap, any range weapon, but it excels at close to medium range combat. The Pistol has first shot accuracy, meaning it is capable of consistent damage at longer ranges.

Light Ammo. The Pistol has a Headshot Multiplier of 2.0x.

The Pistol is a hitscan weapon, with First Shot Accuracy enabled.

From when the weapon was last available in Chapter 2: Season 5 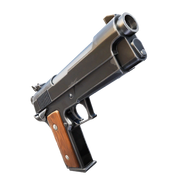 Retrieved from "https://fortnite.fandom.com/wiki/Pistol_(Battle_Royale)?oldid=197920"
Community content is available under CC-BY-SA unless otherwise noted.