The Pump Shotgun is a Shotgun in Fortnite: Battle Royale. It was introduced in Season 1.

The Pump Shotgun is a high damage, short range and slow firing shotgun, best suited to very close quarters. It has 5 shells in the magazine and must be pumped between shots, leading a slow fire rate. It excels at close range combat with its ability to deal significant damage. At lower rarities it still does significant damage, but is very punishing if you miss. The Pump Shotgun can hit targets at mid range, but the damage drop off is so high, and the spread so great that only 1 or 2 pellets will hit.

Shells. The Shotgun has a headshot multiplier of 2.0x. The maximum damage is capped at 165 to 185.

The Pump Shotgun reloads 1 shell at a time, and its reload time statistic is how long it takes for a zero ammo reload to a full magazine.

From when the item was last available in Chapter 2: Season 8:

Combining a Pump Shotgun with:

Promotional Image of The Pump Shotgun during Chapter 2: Season 6 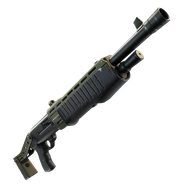