Ragnarok is an Outfit in Fortnite: Battle Royale that can be unlocked by reaching Tier 100 in the Season 5 Battle Pass. He is also a character in Chapter 2: Season 5 that was added into update v15.00.

Ragnarok first appeared in Season 5, having been pulled from his own viking reality, along with his Viking Village. He appeared once again in Chapter 2: Season 5, appearing at the Superstore next to Holly Hedges. (Formerly Hey Boo! Megastore), now turned into Viking Vessel.

Many of Ragnarok's Styles are unlocked from the Ragnarok Challenges. 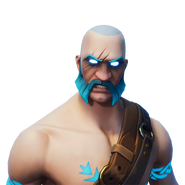 Old Icon
Add a photo to this gallery
Retrieved from "https://fortnite.fandom.com/wiki/Ragnarok?oldid=175694"
Community content is available under CC-BY-SA unless otherwise noted.