Rebooting is a gameplay mechanic in Fortnite: Battle Royale. It was introduced in Season 8.

When a player is eliminated in Squad Based modes (Duos, Trios, Squads etc.), they will drop a Reboot Card. This card can be collected in order to allow the player to reboot a squad member. Players must take this card to a Reboot Van, and reboot them there. Reboot Vans will appear in Solo, but be non-functional, and do not appear in Team Rumble.

When used on the van, the player must hold down the button for 10 uninterrupted seconds, to reboot players. All players are rebooted when activated, one after the other. Reboot Vans are placed at every Named Location on the map, and at many landmarks and open areas.

Once the reboot is activated, the Van will make a loud alarm sound, flash, and the top of the van will display a blue line up in the sky, potentially alerting enemy squads to your location. After this, the van goes on cool-down and cannot be used for a short period of time. When it is ready to use, it will give a short alarm sound. After this, the respawned player will drop from the sky into the area.

If a player fails to grab a reboot card before the timer runs out, the player cannot be rebooted. If the card is grabbed, there is no time limit on rebooting them.

In competitive playlists, players eliminated by Storm Surge does not drop a Reboot Card, and cannot be rebooted as a result.

The vans... the bunkers... the elevators... it's all tied together. It must be!
You see? Where do they come from? HOW?
Reboot Teammates

Who owns the vans? I.O.? GHOST? Maybe Bigfoot?! They've got us trapped.
I still think those vans could be our way out of the Loop.
Reboot Teammates

Not sure who makes those reboot cards, but I don't trust whoever it is.
Keep it quiet, but I don't think the Midas that returned was the same Midas.
Reboot Teammates

I can't prove it, but I think Bigfoot is behind the vans. He's part of it.
Well, maybe Bigfoot isn't. But THEY definitely are.
Reboot Teammates

The Storm hasn't reset yet. There's still time to try and escape the Loop.
Not escaping this time... but soon. Soon.
Reboot Teammates

My fare sheet doesn't say anything about bringing someone back from beyond.
Hope they give you a big tip for that one!
Reboot teammates

Your reboot tech frightens and confuses me.
I might not understand it, but I'll certainly use it.
Reboot teammates 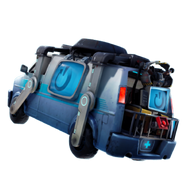 Reboot Vans prior to Update v19.00