Fortnite Wiki
Register
Don't have an account?
Sign In
Advertisement
in: Rare, Selectable Styles, Story and Lore,
and 4 more
English

Level 20 of the Season Shop

Renegade Raider is a Rare Outfit in Fortnite: Battle Royale, that could be obtained by reaching Level 20 in the Season Shop for

1,200 V-Bucks. She was first released in Season 1 and is part of the Storm Scavenger Set. 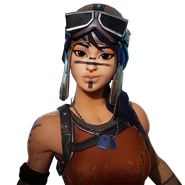 Old Icon (Note: The clipping with her hair) 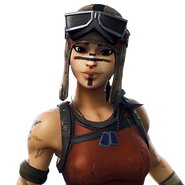 Raider is a character from an unknown reality that has escaped The Loop and has been on the Island since Season 1. She joins a Rebel group with Bandolette, Magnus, Bonehead and more. They get into The Bridge and find the room with The Zero Point. They turn the panel on and she goes back to her home reality.