2.00x
The Revolver is a Pistol in Fortnite: Battle Royale. It was added in the Pre-Season.

The Revolver is a slow-firing, 6-round pistol with a good headshot multiplier. It has first-shot accuracy and uses medium ammo, so its range values and uses are comparable to an Assault Rifle, minus the fast firing. The Revolver suffers at close ranges due to its slow fire rate and wide hip-fire spread. The weapon can function at long ranges, as it is a hitscan, but this strategy can be difficult due to the lack of a scope.

Medium Bullets. The Revolver has a headshot multiplier of 2.0x.

The Revolver is a hitscan weapon, with First Shot Accuracy enabled.

From when the weapon was last available in Chapter 3: Season 2: 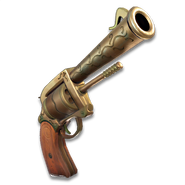 The Icon for the Low Tier revolver, prior to Chapter 3: Season 2