Fortnite Wiki
Register
Don't have an account?
Sign In
Advertisement
in: Imagined Order, The Seven, Vaulted Items,
and 3 more
English

Rift-To-Go is a Consumable in Fortnite: Battle Royale. It was introduced in Season 5.

This item will allow players to carry a portable Rift. The rift that they are carrying will take 0.5 seconds to activate, and when it activated it will teleport players up to the sky, where they have the ability to use Glider Redeploy. If other players are in a nearby radius, it will also teleport them up to the sky. The Rift lasts 10 seconds.

Entering a rift created by another player

From when the item was last available in Chapter 3: Season 2: 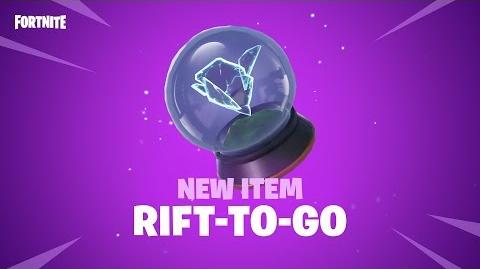