IO Guards (formerly)
Risky Reels is a Landmark in Fortnite: Battle Royale. It is located inside the coordinates E3 and E4. It is usually a safe place to land after jumping out of the Battle Bus, as it is normally scarcely populated. It contains an average amount of loot.

Top View of Risky Reels before The Zero Crisis Finale

Risky Reels during Live At Risky 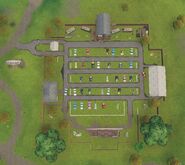