Season 7
Rock Family are a family of stones. They moved around the island every week during Season 7 - Season X. They were captured by the Imagined Order in Chapter 2: Season 5. They returned to the island in Chapter 3: Season 2

In Season 7, a large groups of rocks formed together near the northeast of the island into the shape of a large man. However, he seemed alone and had no purpose. While he began wandering the island, another group of rocks formed together to create a stone lady, who also didn't have much purpose. However, they eventually found each other a distance from each other. They greeted each other by waving. However, they weren't able to meet each other, since a large earthquake occurred and created a large Volcano near where the two were at. The shaking caused them to collapse.

Update v20.40
Family settles down at a tiny farm

The two parents crossing the lava

Parent worry about their kid

Kid saved by the Dog 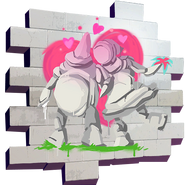