The Rocket Launcher shoots out a large and slow projectile. When this projectile comes in contact with a surface, or stays in the air long enough, it detonates, dealing high amounts of explosive damage. This damage can hurt the player who shot it if they're too close, alongside enemies. Rockets deal more damage to structures than they do to players, and you cannot achieve a headshot with one. Rockets are not affected by gravity, and won't drop if they go too far.

From when the weapon was last available in Standard Playlists, in Chapter 2: Season 8: 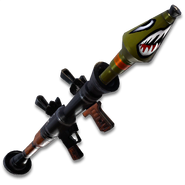 The Chapter 1 Icon for the Weapon 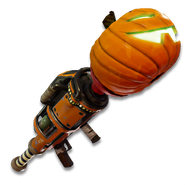 Concept art for the Pumpkin Launcher, likely intended for Save the World.