Ruin is a Legendary Outfit in Fortnite: Battle Royale that could be unlocked by completing 55 Weekly Challenges for the Discovery Challenges.

Ruin has a male Outfit build. It seems that Ruin's entire body is made of stone or solidified lava. He emits an orange glow from his eyes, chest, shoulders and legs. His face looks like a knight's helmet, even though it's fused within his face. His shoulder appendages and arm/leg spikes also resemble a knight's shoulder pads and armor.

Ruin was teased on the 4th of April 2019, during Season 8 in the news tab in-game, with the caption saying: "Ruin is coming..." He was then later revealed with an announcement saying "Battle Pass Owners… Prepare for Ruin. The Week 8 Battle Pass Outfit has been revealed! Complete your Weekly Challenges now to unlock Ruin in Week 8." This was also sent out via email to Battle Pass owners.

Though many suggest Ruin didn't have much importance in the storyline, many others instead speculate Ruin was the cause of the Volcano erupting during the Unvaulting event in Season 8, since Epic Games confirmed Ruin to be "The Prisoner's right hand" (meaning he may have helped The Prisoner set off the Volcano and that in the Week 8 loading screen called "Ruination" he seems to be bending lava. 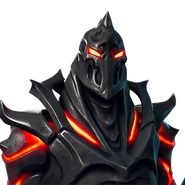 The "Ruin is coming..." teaser

The Ruination Loading Screen
Add a photo to this gallery
Retrieved from "https://fortnite.fandom.com/wiki/Ruin?oldid=173600"
Community content is available under CC-BY-SA unless otherwise noted.