Tier 23 of the Season 3 Battle Pass

Rust Lord is an Epic Outfit in Fortnite Battle Royale, that could be unlocked by reaching Tier 23 of the Season 3 Battle Pass. He is a part of the Storm Scavenger Set. 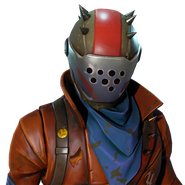 Rust Lord can be found as a Character at Compact Cars.

If you're lookin' for Rust, I'm your Lord

Welcome back to the scrap heap.

All those Bars'll be scrap someday.

Helicopter Guards were hostile AIs exclusive to the Impossible Escape! LTM. They guarded Choppas and Choppa Parts and attacked players on sight.

When knocked, Guards could be shaken down to reveal other Guards in the area.