Ryu is a Gaming Legends Series Outfit in Fortnite: Battle Royale, that can be purchased in the Item Shop for

2,200 V-Bucks. Ryu was first released in Chapter 2: Season 5 and is a part of the Street Fighter Set. 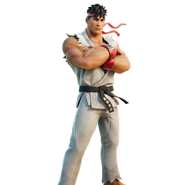 Ryu (リュウ(隆) Ryū?, "Prosperous", "Plentiful", "Abundant") is a human from Reality: 3DO-T who was hired by Agent Jones to cause chaos during Chapter 2: Season 5, so that no one can escape The Loop.

Jones arrives at Reality: 3DO-T to take Ryu and Chun-Li to Apollo with him. It is unknown which one is canon, but there are two ways of how Jones' visit to the Reality went like. In the Reality Log, Ryu tries to teach Jones his moves and Jones can't focus on him. In the cinematic, Jones arrives in the start of a fight between Ryu and Chun-Li, and opens a Pure Portal with his Portal Device and take them to Reality Zero.

During the chaos, Ryu fights against Peely and when he is distracted by Jones running through, he strikes and eliminates him with a Hadouken.