This Section is about an item / mechanic that has been put in The Vault.

The Scoped Assault Rifle is an Assault Weapon in Fortnite: Battle Royale. It was introduced in the Pre-Season.

The Scoped Assault Rifle is a mid to long ranged fully-automatic weapon with a low zoom scope equipped. It fires slowly, does similar to damage to the Assault Rifle, but its key purpose is engagements at ranges where un-scoped weapons cannot effectively hit targets. The weapon is weak at close range due to its low fire-rate and low damage per second, but excels at long ranges where it can hurt targets using hitscan.

Medium Bullets. Its scope magnified by 2x. The Scoped Assault Rifle has a Headshot Multiplier of 2.0x.

The Scoped Assault Rifle is a hitscan weapon. As it uses a scope, the fired bullet will always shoot from the center of the crosshair. Despite this, there is still damage fall off on the Scoped AR at longer ranges.

From when it was last obtainable in Chapter 2: Season 4 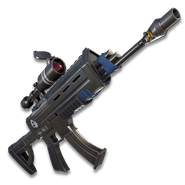 The Weapon's Icon prior to Chapter 2: Season 1.

Promotional Image for the Scoped Assualt Rifle in the v1.6.3 Patch Notes.

Concept Art for the Scoped Assault Rifle, when it existed only as a Save the World weapon named The Deathstalker