For the article on the Chapter 2 Season of the same name, please see Chapter 2: Season 1

For the article on the Chapter 3 Season of the same name, please see Chapter 3: Season 1

Season 1 was the very first season of Fortnite: Battle Royale, which started on October 25th, 2017, and ended on December 14th, 2017. It was also the shortest season, lasting only 50 days, compared to the average 74 days. The name of this season is "First Steps".

For the first time, progressing through the game allowed you to get rewards that could be purchased for V-Bucks, which unless you have Save The World, can be obtained through in-game purchases for real money.

Unlike the following seasons, it had no Battle Pass. Instead, it used an XP progression system, where in you unlocked rewards to purchase by getting XP from regular Battle Royale games. As mentioned above, you needed to have V-Bucks to actually get them.

This progression system was taken away with the introduction of the Battle Pass in Season 2, and was reintroduced with a few alterations in Chapter 2: Season 1. 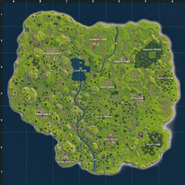