For the article on the Chapter 2 Season of the same name, please see Chapter 2: Season 3

For the article on the Chapter 3 Season of the same name, please see Chapter 3: Season 3

Little map changes happened in Season 3, with the only new area added being Lucky Landing.

The storyline began in this season, with players spotting a bright, blue object (later revealed to be a comet) in the sky. Many players speculated that the comet would hit and destroy Tilted Towers due to several clues and hints. Despite the rumours, the comet hit Dusty Depot instead at the start of Season 4.

The game's user base increased around this season as Fortnite: Battle Royale was introduced to the iOS community.

At the end of this season, non-downloadable updates released every other week referred to as 'Content Updates' were introduced so Epic Games had more time to fix the more complex bugs. The first Content Update was released in April 4th, 2018.

The Battle Pass costs 950 V-Bucks, the same as last season. This Battle Pass introduced new types of cosmetics, which included: Loading Screens, Contrails, and Back Blings. 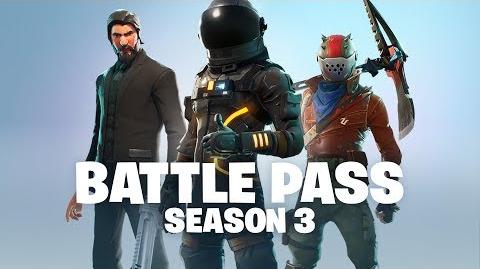