For the article on the Chapter 2 Season of the same name, please see Chapter 2: Season 4

This season's theme was superheroes.

This is the first season to have a story trailer as it introduced the lore.

How Did it Start?

In Season 3, players saw a bright blue object in the sky. As it grew bigger and brighter over time in the sky, people realized it was a comet, heading straight towards the island. Telescopes and various signs were placed at high-altitude areas around the map, as the inhabitants prepared for its arrival. Small comet fragments began falling down around the island at the end of Season 3. When Season 4 launched, the comet slammed into the island, although it came in multiple fragments which impacted different regions around the map. By far the largest fragment slammed into the Factory unnamed POI, completely vapourizing the facility. The resulting impact and crater formed Dusty Divot, replacing Dusty Depot, which was severely damaged by the comet and thus renamed due to the massive crater. Several other smaller fragments fell around the island. One of them landed at Tilted Towers, pulverizing an entire building into rubble, another fragment decimated the Prison, and a third one landed directly at Risky Reels. It blew straight through the cinema screen and landed amongst the densely packed cars. Another tiny fragment landed at The Motel, although that impact was enough to flip a nearby bus and slam it into the motel roof.

The comet's impact left behind Hop Rocks, mysterious rocks that gave loopers who consumed them a low-gravity effect, possessing some sort of connection with The Zero Point. Immediately after the impact, an Unnamed Investigation Agency erected a research facility at Dusty Divot to research and investigate the mysterious glowing rock at the center of the crater. UIA cars arrived at each of the large impact craters to examine the hop rocks in those areas.

As this was happening, a movie crew was filming a movie titled 'It came from Moisty Mire', when a comet fragment slammed into the nearby Prison POI. It was revealed that the evil super-villain Omega found himself freed from the Prison by the explosion. The heroes led by Carbide began formulating a plan at their Hero Mansion near Lonely Lodge. In his Villain Lair, Omega began to assemble an army of augmented soldiers for a final battle with the superheroes, which took place in Tilted Towers. It was then revealed to be part of the movie, as the actors were seen socializing on set. Ultimately the movie was caching in on the comet impact.

The Villain Lair for the superhero film contained a rocket used as a prop for Omega's sinister intentions. However, it was actually fully-functional and could have been built by the UIA using blueprints from The Seven. At around the same time the movie was being finished, the UIA began filling up the smaller comet craters with concrete, and a construction crew was called in to begin rebuilding the destroyed parts of Risky Reels and Tilted Towers. The UIA collected all of the hop rocks from each crater and began transporting them to the Villain Lair in trucks, as the glowing rock at Dusty Divot was slowly opened up, revealing a mysterious pod containing The Visitor, a member of The Seven. It seemed as if the meteor was actually a method of transportation that The Visitor used to get to the island. The seemingly hostile individual broke out of his pod and trashed the research facility, escaping to the Villain Lair, which already contained all the hop rocks assembled by the UIA. The fact that the UIA transported the hop rocks to the Villain Lair cannot be a coincidence. It seems like the UIA actually worked with The Visitor in secret so that The Imagined Order could not see through The Visitor's plans and put a stop to it. Since The Imagined Order does not actually have direct control over the island (they only maintain the loop and storm, they can't actually see everything), the UIA may have shielded The Visitor from them, assembling a rocket for him and carrying the necessary hop rocks to the area. Him trashing the Divot was possibly done to continue to fool the Imagined Order into thinking that the Visitor is not-at-all related with UIA. Whether The Visitor worked with the UIA or not, he modified the rocket to allow it to channel The Zero Point field, and began fueling it with hop rocks, which contain the Zero Point energy, and can manipulate it to open rifts through space and time.

A hologram in the Villain Lair began projecting a three-day countdown for the Blast Off event on 27th June 2018, followed by an island-wide countdown on all TV's. Loopers realized that the rocket was going to launch on 30th June 2018, as sirens also began blaring at the lair, heard from everywhere on the island.

The Rocket Event and aftermath

Once the countdown ended, the rocket (piloted by the Visitor inside) took off from the Villain Lair, leaving behind a thick trail of smoke as it ascended into the sky. It momentarily stopped in the air to break off its rocket booster, before accelerating into the sky. Once reaching a high altitude, the rocket shut off its engines and stalled in the air, before plummeting back down towards the island. This could have been due to the Imagined Order finally realizing The Visitor's plans and remotely shutting off his rocket. If that is true, it was too late anyway as his plans were already in motion, and the Visitor could be heard saying 'Zero Point Oscillator on, Setting coordinates. Engaging quantum field accelerator'. The rocket activated a laser that pointed directly at Tilted Towers, and boosted towards the location. However, before it could hit, the Visitor activated a device on his rocket and opened a rip through space-time, a rift. Effectively acting as a portal to The In-Between, the realm of The Zero Point. It could the be subsequently manipulated to teleport or to travel through time. It can strongly be assumed that the Visitor's 'Zero Point Oscillator' acted as the device necessary to manipulate the Zero Point/In Between to create a tear through both space and time. The rocket went through the rift and boosted out of another one over Moisty Mires, flying around the island to enter another rift near Snobby Shores. Finally, the rocket boosted out of another rift at Loot Lake and accelerated into the sky, blasting through space-time and creating a gigantic rift in the sky, known as the Crack in the Sky. The Visitor did not return at all until Season X.

Unlike earlier rifts opened by the rocket, the Crack in the Sky seemed to be permanent. In fact, it began to crack open further and expand outwards in the sky, as space-time around the island began to destabilize. Small rifts began appearing around the island within the next few days, sucking away objects, including the Tomato Town mascot, Motel sign, and the Durr Burger head. The Burger head was lore-wise transported to the real world, where several signs were placed warning of an instability in the region. Back on the island, rifts began bringing in objects from other realities, including a Viking ship anchor, dinosaur bones, and an ancient wagon, as Season 5 rapidly approached.

The meteor has crashed into the Island, destroying Dusty Depot, with smaller meteorites impacts happening all over the Island.

The Battle Pass costs 950 V-Bucks, the same as the previous 2 seasons. This Battle Pass introduced a new type of cosmetic: Sprays. 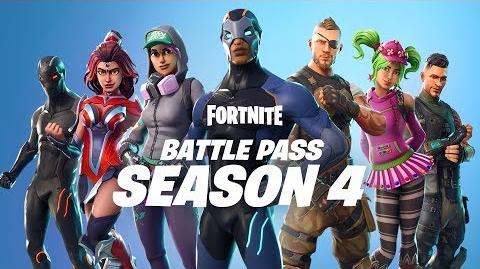