For the article on the Chapter 2 Season of the same name, please see Chapter 2: Season 5

77
Season 5 of Fortnite: Battle Royale, with the slogan "Worlds Collide", started on July 12, 2018 and ended on September 27, 2018. It was originally supposed to end on September 24th, 2018 but Epic Games extended the end date to match with the 1 year anniversary of Fortnite being Free to Play.

This season's theme revolves around world collision, taking things from other realities to Reality: Zero.

Season 5 continues the storyline that was started in Season 3.

The Crack in the Sky created by the Blast Off event connected Reality Zero directly to other realities, and within days before Season 5 began, rifts began forming around the island, rifting away objects from the island and bringing in new ones from other realities.

At the beginning of the season, entire locations from different realities were brought to the island through the Crack in the Sky. Moisty Mire was replaced with a giant desert, along with a large resort town, an mexican-like town, scrapyard, and a cafe. The dirt racetrack to the east of Retail Row was revamped and upgraded to a full-scale concrete motorcourse track. Two more major changes occurred to the island. The farm Anarchy Acres was replaced with a luxury golf club called Lazy Links, and a large Viking Village was dropped on top of a mountain near Snobby Shores, complete with a large viking ship. Dusty Divot became overgrown with vegetation, and the research facility there started to fall apart and decay, same with the Hero Mansion and Villain Lair. The Durr Burger head that was transported into the real world was, again, sucked through a rift and transported back to the island, and could be found on top of a hill near Pleasant Park. Around each of the affected areas, rifts could be found, which transported loopers high up into the sky when entered.

After the Crack in the Sky brought the locations from different realities into the Island, it started shrinking and closing, and in the process, becoming purple and sending lightning strikes in a mountain east of Fatal Fields in the Desert. When the Crack in the Sky was nearly done closing it sent it's last lightning strike, which was the longest, bringing in a Cube, then finally closing.

This Cube started rolling around the Island, burning runes into the soil of the Island with the purpose of gathering power, then sinking into the Loot Lake, where the Zero Point was, so it could start the next phase of it's plan in Season 6.

At the same time, a group of Enforcers likely working for the IO, started retrieving objects previously rifted away back to the Island, and closing those rifts.

The Battle Pass cost 950 V-Bucks, the same as the previous 3 seasons. This Battle Pass introduced a new type of cosmetic: Toys.

Since this season, you can complete outfit challenges even after the season ends. The Omega and Carbide challenges were locked, however. 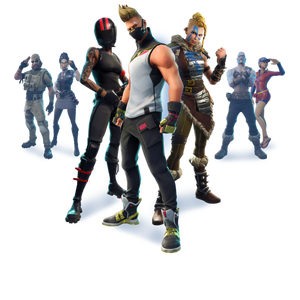 The Crack in the Sky continued to take away and bring things from other realities, this time, rifting a entire Desert into the Island as well as full towns and locations.