For the article on the Chapter 2 Season of the same name, please see Chapter 2: Season 6

The theme revolves around Darkness and the Cube, just in time for the Halloween season.

Season 6 was the first season to introduce pets and music to the game, as well as a new consumable, Shadow Stones. Changes to the map include the addition of corrupted areas, corn fields, Floating Island, and the Haunted Castle. You can find the full list of Cosmetics released this season here.

Season 6 continues the storyline that was started in Season 3.

Throughout the second half of Season 5, The Cube rolled around the island, printing seven glyphs before rolling into Loot Lake, sinking underneath the Lake and deactivating underneath the central island. The entire surface of the lake was turned purple in the process

At the start of Season 6, The cube activated. It absorbed all of its energy dispersed along the surface of the lake and tore the central island from the ground and lifted it up into the air, with The Cube attached to the bottom of the floating island. The entire island was kept suspended in the air by an an air vortex powered by the cube itself.

Loot Lake was renamed to Leaky Lake on account of the mess that The Cube left behind. The central chunk of the lake was completely missing, and in the very center of the ruined lake was a large whirlpool with a bright light coming from underneath it. This likely lead to The Vault, and the location of the whirlpool corresponded to the exact location from where the cube emerged from at the start of the season, likely meaning that The Cube actually entered the vault, but returned back to the island for an unknown reason.

The glyphs located around the island became corruption zones. It seems like the cube printed the glyphs to act as energy converters, using up the soil and natural resources in the vicinity of the glyph to convert into energy usable by the cube. In the process, the glyphs corrupted the areas surrounding them, with dead trees and barren soil, along with Shadow Stones and purple vents littering the corruption zones.

Only one rift remained at the start of Season 6, kept maintained and controlled in a laboratory within an underground bunker in Wailing Woods.

At this point, the cube was completely filled with energy and pulsed rapidly. It returned to Leaky Lake, where it started to draw power from the vortex in Leaky Lake and projected a beam of purple energy upwards, opening a purple portal in the sky, which was likely a portal to the The Last Reality. Over time, the portal in the sky grew, and covered the island in a purple hue

On August 24th 2018, Fortnitemares began. The cube released a sudden burst of energy that ripped the floating island into several large chunks. The cube material that grew through the island was shredded into fragments and scattered around the island by a shockwave. These fragments spawned Cube Monsters, which attacked loopers. A thick fog also materialised and shrouded the entire map in darkness. This event was likely the first stage of invasion by The Cube, the first step into dominating and slowly destroy the Island beyond saving, preparing for a full-scale Last Reality invasion, which would then destroy this reality with The Cube's Cradle.

The Cube however, became overwhelmed with the amount of power it had and it's body started breaking and slowly decaying as the days passed, and the remains of The Cube's outer shell melted and dropped into Loot Lake, culminating in The Butterfly Event on November 4, where The Cube's outer shell completely melted away and it began spinning wildly, tearing itself apart in a giant explosion. All Loopers on the island were somehow sent to The In-Between. What happened next is unclear, but a large rift formed that took the appearance of a butterfly. It fluttered around each looper, before landing on the looper's finger in a cinematic event, transporting each player back to the island.

After the Cube exploded, the pieces of the Floating Island fell into the lake, and the ruined lake was changed to a peaceful paradise, with colourful grass, flowers and waterfalls. In the center of the Lake stood the remains of The Cube, arranged in a Stonehenge formation, while the chunks of the Floating Island were partially buried and covered in grass around the central area of the lake. The sky vortex, fog, and cube fragments scattered around the island were wiped away as if they never existed, and thus, Fortnitemares ended as Season 6 drew to a close.

Sometime after the Butterfly Event, a giant iceberg began appeared in the far south-west, shrouded in a snowstorm and on a direct collision course with the island. A few weeks before the end of Season 6, a robot codenamed A.I.M. arrived on the island and planted a flag representing the Expedition at Flush Factory. The robot then began scouting the island and observing its inhabitants, preparing for the incoming invasion...

Note: When you complete four challenges listed above you will receive a 5,000 XP Bonus.

The Battle Pass costs 950 V-Bucks, the same as the previous seasons. This Battle Pass first introduced pets and music in the game. 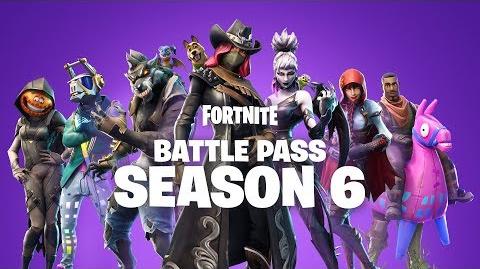 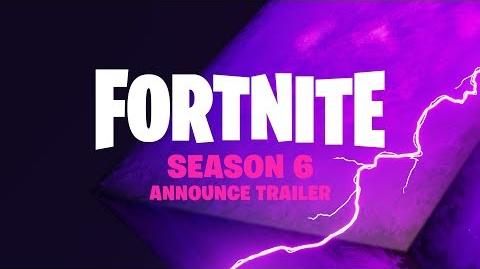