For the article on the Chapter 2 Season of the same name, please see Chapter 2: Season 7

Season 7, with the slogan “You Better Watch Out”, is the seventh season of Fortnite: Battle Royale which started on December 6th, 2018 and ended on February 28th, 2019.

The supposed end date was on February 14th, 2019, but was postponed by 2 weeks due to Epic Games’ holiday break.

The theme revolves around the Holidays, especially Christmas.

By purchasing the Battle Pass, players were given early access to Creative mode, 1 week before everyone else on December 13th, 2018.
You can find the full list of cosmetics released in this season here.

The Start of Something New

Season 7 started a new storyline, separate from the storyline that had been happening since Season 3. The corruption zones had completely faded away by the time the Iceberg spotted in late Season 6 collided with the southwest side of the island, burying Greasy Grove under mounds of ice and completely destroying Flush Factory. Three new locations were brought in with the Iceberg, Happy Hamlet, a small town for the inhabitants of the Iceberg, Polar Peak, a large ice mountain containing a mysterious tower, and Frosty Flights, the headquarters of The Arctic Force, a military faction commanded by Sgt. Winter, who takes his orders from The Ice King, the entity responsible for controlling The Iceberg. Following the Iceberg's collision with the island, The Arctic Force invaded the island using Slushy Soldiers and X-4 Stormwing planes, setting up numerous Expedition Outposts throughout the island.

Within the next few days following the launch of Season 7, Polar Peak began to thaw out, revealing a giant castle owned by The Ice King and several surrounding buildings. As the ice continued to melt even further, a throne room, library, and a dungeon were revealed. The dungeon contained cells, one of which contained five mysterious eggs. A further room was also revealed, housing a large mound of ice surrounded with chains.

As these events were happening, Tilted Towers was rebuilt into a news station following the destruction of the previous building by The Cube.

The rest of the Season was mostly silent, the only storyline-related events being that the Infinity Blade temporarily became accessible for loopers to use. However, around 40-50 days before the end of Season 7, a large sphere of ice appeared above Polar Peak, which contained a dormant Ice King inside, swirling several cube shards in his hands, likely sourced from the Cube remains left at Loot Lake following The Butterfly Event. It seemed like The Ice King was combining the power of The Cube with his ice magic, and a countdown appeared to a live event.

When the countdown reached zero, The Ice Storm began. The Ice King awakened from his slumber and broke out of his ice sphere, fragmenting it into pieces and unleashing a powerful shockwave that pushed the storm away. Using his magic, The Ice King created a giant hologram-like image of himself next to the island. In the next few seconds, he built up a giant snowstorm and swept it over the map, covering it in snow and ice. The power of The Cube combined with the Ice Magic spawned Ice Cube fragments all over the map, spawning the Ice Legion. The entire map was also covered in a snowy mist, significantly obscuring vision similarly to Fortnitemares. The Ice King might have been attracted to the island following the events of The Cube, and set to harness its power for himself.

It was revealed that the large mound of ice within Polar Peak contained The Prisoner, who seemed to be the Fire King, and thus, an enemy to the Ice King. It seemed like at some point, The Ice King managed to defeat The Prisoner, chaining him up within Polar Peak and encasing him within a mound of ice so that he could never oppose him again. However, what the Ice King did not factor, was that the climate of the Fortnite Island was too hot. The mound of ice began melting, and soon, the Prisoner managed to break free and escape from Polar Peak, taking the five eggs and fleeing to the Northeast side of the island. Within a week or so, the snow on the northeast side of the island began melting. Within days, the Ice Monsters disappeared, and the snow retreated back to the southeast side of the map, as The Prisoner began casting spells to melt the ice.

The Prisoner's activities was affecting the magma underneath the Fortnite Island, dozens of fissures to open up around the island. The largest one of the fissures (which also happened to be the last one) occurred inside Tilted Towers, destroying the news station that was just constructed. In the final days of Season 7, Wailing Woods became dried up and discoloured, as ashes started to rise up from the ground.

950 V-Bucks, like the previous seasons. This Battle Pass first introduced wraps into the game. 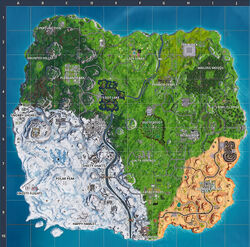 The southwest quarter of the map was covered by snow, thus creating a new biome. Shifty Shafts and Snobby Shores were completely covered in snow, while Tilted Towers and Lucky Landing were partially covered.

Read how the Map Changes progressed throughout the season in these patches: