This Item/Mechanic is not present in competitive playlists.
It can still be found in core playlists and other game modes when available.

∞ if a player is launched through a structure

Shockwave Grenades are a Utility Throwable Item in Fortnite: Battle Royale. They were added in Season 5.

Shockwave Grenades are thrown by the player using the arc provided. Once thrown, they will knock back anyone inside of the blast radius, be it the player, an opponent, or a squad member. They will also knock back vehicles, and wildlife.

If caught in the blast radius, the player will be blasted away from it at a high velocity. If the player is blasted near a structure, they will destroy it for a few tiles, allowing the player to launch someone or themselves through a few layers of structures. It will only destroy a structure if it blasts a player through it, else it will deal no damage and does not work through structures.

If caught in the blast, whoever is affected will not take fall damage, unlike Impulse Grenades.

Shockwave Grenades deal no damage. There is no cooldown between throwing them.

From when the item was last available in Chapter 3: Season 2:

The Shockwave Grenade spawns in stacks of 2. 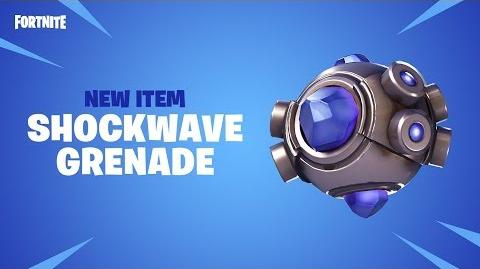