Singularity is a Legendary outfit in Fortnite: Battle Royale that could have be obtained when you collect 90 Fortbytes in Season 9.

SIngularity's first appearance was in Season 8, if you can consider it an appearance. When the extradimensional Vault was opened in the Season 8 event, The Unvaulting, her helmet sat on an unoccupied desk in front of the then-contained Zero Point, inside the In-Between.

In Season 9, it appears that she left the Vault and shared her and her partner Vendetta advanced technology with the people of the island, resulting in the construction of Neo Tilted and Mega Mall. This technology seems to have been powered by the Zero Point, using a giant cord from Neo Tilted to Loot Lake. She also had a metal statue of herself within Neo Tilted. There been theories that Vendetta build that statue for her. During the Final Showdown event, it was revealed to actually be the handle of an enormous sword.

It is theorized that Singularity and Vendetta was the people who were behind the building of the Mecha in Season 9. It is likely that they also piloted it during the event.

According to some theorists, Singularity may or may not be behind the mask of The Paradigm. If this is true, Singularity likely released the Zero Point intentionally as part of The Seven's plan to fix Reality. The Final Showdown may have then been a setup just to release the orb.

Being the first and the last female secret outfit of chapter 1, Singularity's name is inspired from the Zero Point, which officially is a singularity. Singularity has 3 progressive varients and 6 edit styles: Cuddle, Drift, Durrr, Pizza, Rex, and Default, which all hinted to the Mecha's design. 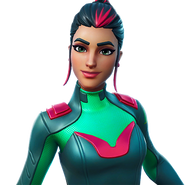 Singularity's statue in Neo Tilted
Add a photo to this gallery
Retrieved from "https://fortnite.fandom.com/wiki/Singularity?oldid=177513"
Community content is available under CC-BY-SA unless otherwise noted.