IO Guards(17.30)
Slurpy Swamp was a Named Location in Fortnite: Battle Royale added in Chapter 2: Season 1 to the island Apollo. Slurpy Swamp is located inside the coordinates C6 and C7, south of Weeping Woods, northwest of Misty Meadows, and southeast of Holly Hatchery.

It is a large flooded swamp with many pools of slurp water that can be stood in to get health and shields, along with a giant Slurp Juice Factory, with smaller buildings around it, and several roads leading to the POI. The location also consists of dilapidated houses similar in build to that of Shanty Town, and are part of the Swamp, as confirmed by a quest from Big Chuggus. Currently, most of the buildings are in a constant low gravity mode, and are floating similar to the Floating Island of Chapter 1. This is because The Mothership appears to be gradually abducting the location, and has started pulling Slurpy Swamp from the ground.

CHUGGUS HAVE LOVE PLANS, WHY YOU LOOK SO SURPRISED?
CHUGGUS MAKE ALL LOVE SLURP LIKE CHUGGUS LOVES SLURP!
Deliver the love potion to Slurpy Swamp or Shanty Town

They're targeting the old Slurp factory for a reason. We'll find out soon enough.
The aliens have taken an interest in Slurpy Swamp. Clear the area so the IO can investigate.
Damage an opponent in the Slurpy Swamp abduction site

They've abducted the Slurp Factory. Drop everything you're doing and investigate. NOW.
So they want to fight dirty? Fine. Nothing will prepare them for IO's counterattack.
Visit Slurp Factory inside the Mothership

The lobby background showing off the abduction 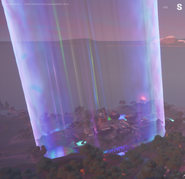 The rest of the factory, still grounded

A Chest found on top of a floating rock

Road out of the location

Alternate road out of the location

The top of the factory next to Rickety Rig

The swamp, as featured in Forged In Slurp