For the article on the The Original version of the same name, please see Grenade Launcher

For the article on the The Spring version of the same name, please see Egg Launcher

The Snowball Launcher is a seasonal Explosive Weapon in Fortnite: Battle Royale, introduced in Season 2. It is only available during Winterfest and select other Winter Events. It is a modified version of the Grenade Launcher with an Exotic version named The Big Chill.

The Snowball Launcher shoots out a snowball projectile which is affected by gravity and explodes immediately on impact, dealing explosive damage to players and structures in a small radius.

From when the item was last available in Chapter 3: Season 1 (Winterfest):

Depending on when it was introduced, the Snowball Launcher either replaced the Grenade Launcher, like in Season 2, or it is introduced as its own weapon, like in Chapter 3: Season 1. 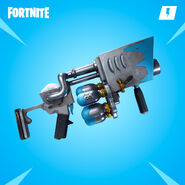