watch 03:41
Wiki Targeted (Games)
Do you like this video?
Play Sound

Splode is an Epic Outfit in Fortnite: Battle Royale that can be purchased from the Item Shop for 1,500 V-Bucks. He was introduced in Season 8.

He also appears as an AI character for Chapter 2, Season 5. You can buy the Boom Sniper Rifle from him at Unremarkable Shack for 600 Bars, and an Epic or Legendary Rocket Launcher can also be purchased from him.

Splode appears to be a human prisoner (as seen from his flesh hands and orange jacket) with a false leg and a defused bomb over his head. The bomb is black with a white skull and what seems to be a respirator over his mouth. A brown strap goes across his body from top-left to bottom-right.

His AI dialogue shows that he has a strange fascination with explosions.

Splode can be found as a Character at Unremarkable Shack. 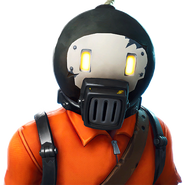 Add a photo to this gallery

Retrieved from "https://fortnite.fandom.com/wiki/Splode?oldid=209816"
Community content is available under CC-BY-SA unless otherwise noted.