For information on the weapon category of a similar name, see Submachine Guns.

The Submachine Gun is a fast firing, short range and high hip-fire accuracy weapon, in line with most SMGs in the game. The purpose of the Submachine Gun is to deal high amounts of DPS in a close range environment. The weapon can function at longer ranges, but the damage falloff is high and the accuracy low.

Light Bullets. The Submachine Gun has a headshot multiplier of 1.75x.

The Submachine Gun is a hitscan weapon. It does not have First Shot Accuracy enabled, and will always fire a random spread of bullets, which increases with continuous fire. This spread is decreased whilst crouching.

From when the weapon was last obtained in Chapter 2: Season 8:

Combining a Submachine Gun with: 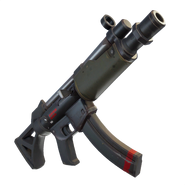