For the article on the the similar location which replaced this one of the same name, please see Believer Beach

Sweaty Sands was located in grid areas B3, B4, C3, C4, North of Holly Hedges and directly south of Coral Castle. Sweaty Sands was a beach town, with a large hotel and multiple houses. The location also had a long pier as well. 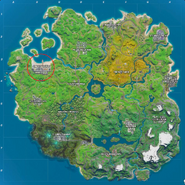 The area at the beginning of Chapter: Season 3