The Tactical Shotgun is a Shotgun in Fortnite: Battle Royale. It was introduced in Season 0.

The Tactical Shotgun is a fully automatic, short ranged weapon. It fires a string of pellets when shot, which tighten on aiming down sights. The weapon can be fired continuously with no effect on accuracy. At medium range, it suffers due to the spread of pellets failing to connect with a target, and at long ranges it is almost completely ineffective.

Shells. The Tactical Shotgun has a headshot multiplier of 1.5x.

From when the weapon was last available in Chapter 2: Season 5

The Tactical Shotgun (Low Tier) prior to Chapter 2: Season 1. 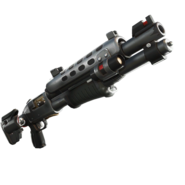 The Tactical Shotgun (High Tier) prior to Chapter 2: Season 1 (Render is at a different rotation)
Add a photo to this gallery

Retrieved from "https://fortnite.fandom.com/wiki/Tactical_Shotgun?oldid=192992"
Community content is available under CC-BY-SA unless otherwise noted.