Fortnite Wiki
Register
Don't have an account?
Sign In
Advertisement
in: Legendary, Selectable Styles, The Last Reality,
and 8 more
English

The Cube Queen is a Legendary Outfit in Fortnite: Battle Royale, that could be obtained by completing The Cube Queen Quests during Chapter 2: Season 8. She is part of the Long Live the Queen Set.

— The Cube Queen, singing within her music track

She and her army of Cube Monsters invade, destroy and take over any Realities they come across. She had sent a Cube before, but it failed to eliminate our reality, so she started to plan a mass takeover - she just didn't have an opportunity. And then she did. After noticing Raz's power, she and the Kymera invaded the Island via a Mothership.

In the Chapter 2 Finale, she opens up the top of Reality Zero revealing a swarm of Motherships and Abductors. She was defeated when the Island was rotated and she plummeted into the ocean. Her current whereabouts are unknown.

Her Army of Cube Monsters

Promo with the rewards

Promo with the rewards 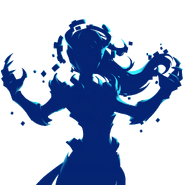