For information on the live event, see The Devourer of Worlds.

For the article on the landmark of the same name, please see The Devoured

The Devourer is a Frozen Series Outfit in Fortnite: Battle Royale, that can be purchased in the Item Shop with the Polar Legends Pack for $19.99. It was first released in Chapter 2: Season 1 and is part of the Polar Legends Set.

The Devourer was a gigantic monster that was trapped under Polar Peak by The Ice King. This creature was the main antagonist of Season 9 and The Final Showdown event.

The creature was trapped on the Moon inside Polar Peak.

After The Unvaulting Event, the ice on Polar Peak melts and The Devourer's Eye gets revealed. It then leaves Polar Peak, and takes the castle with it. It makes its way into the ocean and leaves the Island. After the Monster broke out of Polar Peak, multiple occurrences happened, such as Pleasant Park's modern house destroyed, one of Loot Lake's main buildings being destroyed (along with damage to the power cable), the far-north house at Snobby Shores being destroyed, along with footprints West of the Frozen Lake (AKA frozen Greasy Grove).

During the Season 9 event The Devourer rises back up from The Ocean, and starts heading towards The Vault to consume The Zero Point. It gets stopped by Mecha and they get into a fight. The Devourer beats up Mecha and bites off it's arm but Mecha gets up and uses The Zero Point's power and the statue in Neo Tilted, which turns out to be a sword and plunges the sword into The Devourer's head, killing it. The Devourer's skull remained near Salty Springs until the end of Season X.

The Zero Point reorganized the remains of the monster to Artemis.

The Government dug up the remains of the monster. 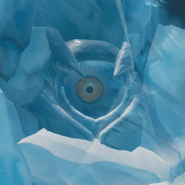 The Monster under Polar Peak

The Monster's Track west of the Frozen Lake. 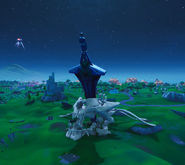