The Paradigm: It's good to be back.

It's good to be back.

The Origin: I can't help but think this isn't over.

I can't help but think this isn't over.

The Visitor: What do you think about me staying here on the island?

What do you think about me staying here on the island?

The Imagined: The Loopers keep asking me when you're coming to the party!

The Loopers keep asking me when you're coming to the party!

The Scientist: Please don't ask me to fix the monument again.

Please don't ask me to fix the monument again.

The Origin: Have you reviewed the latest plan?

Have you reviewed the latest plan?

The Visitor: We have to put a stop to the infighting. Or we're doomed.

We have to put a stop to the infighting. Or we're doomed.

The Imagined: I'm going to uncover my past, with or without your help.

I'm going to uncover my past, with or without your help.

The Scientist: Your tactician is being a little... grudge-y, don't you think?

Your tactician is being a little... grudge-y, don't you think?

The Foundation appears as a Character and can be talked to and traded with. However, he retains his boss music, boss voice lines and the special ability (when attacked) from Chapter 3: Season 1.

He often patrols around the Seven totems and spend some times looking at each totems.

Looper. Something to report?

Stay ahead of the storm.

Clear a path to victory.

The Seven owes you a debt.

Good flying out there.
Wearing The Paradigm

We defeated The Imagined Order. Take a breath.
Wearing The Origin

I haven't had time to read your latest study.
Wearing The Scientist

You want to stay? Permanently? Let me think about it.
Wearing The Visitor

You'd be giving me gray hair if I had any left.
Wearing The Imagined

You can relax now.

You must be here to personally deliver a surrender.
Wearing Gunnar

Back to remind me that the odds are against us?
Wearing Doctor Strange

Were you able to lock on the Paradigm's coordinates?
Wearing The Visitor

I know you believe in the Paradigm. Others... Disagree.
Wearing The Scientist

Are you givin' 'em grief out there?
Wearing The Imagined

I saw your updated plans. Consider them approved.
Wearing The Origin

If you're going to betray us, get it over with.
Wearing The Paradigm

The Foundation drops the following items when eliminated:

He uses an unobtainable The Foundation's MK-Seven Assault Rifle to attack players.

The Foundation was a Boss that could be found at Sanctuary during Chapter 3: Season 1.

The Foundation dropped the following items when eliminated:

Similarly to Zyg and Choppy, The Foundation would not attack players on sight unless he was shot at or a player blocked his path for too long.

Once his healthbar is depleted, The Foundation will get knocked down, without the option for Shakedown. He can be revived by Seven Sentries that guard the location.

When in a fight, The Foundation could cast an energy ball which deals 90 explosive damage to players in the vicinity and knocks them back, as well as destroying structures.

Getting ready to throw

Leader of The Seven

The Foundation is the founder and leader of The Seven. He is an organic entity in a suit that has been keeping him alive in infinite realities and in the Nothing beyond them. He has a lot of knowledge about The Zero Point.

The Foundation is a short-tempered, arrogant and ruthless person. He is heroic and understands the difference between right and wrong.

Promotional image with his Back Bling and Harvesting Tool

Promotional image for the Outfit and his style's

The Foundation Washes Up in Gotham Harbor 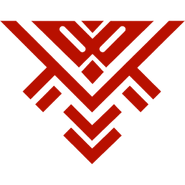 Emoji used for #FortniteFlipped, as well as the Foundation's Fortune emoticon

Suit Shield diverted to his Gauntlet 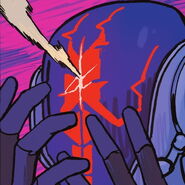