The Good Doctor is an Epic Outfit in Fortnite: Battle Royale, that can be purchased in the Item Shop for 1,500 V-Bucks. He was first released in Chapter 2: Season 4 is a part of the Duplicity Set.

The Good Doctor can be found as a Character at Steamy Stacks. He will start off as a friendly Character, however, he may randomly turn hostile after doing the Morph Juice emote. If eliminated, he will turn into his ghost form.

Hyde dropped the following when eliminated.

Careful. i'm not feeling.. quite myself these days.

I do wonder... How did the food chain here come to be?
A stink fish. A cruel joke by evolution, perhaps?
Collect a Stink Fish

You hardly smell putrid at all!
How disgustingly perfect.
Collect a Stink Sac

Some might ask, why even create such an invention?
Because we can. I say, because. We. CAN.
Craft a Primal Stink Bow

Now here is an interesting experiment...

Ah, are you my new test sub-- assistant? No?

Ah! You still have the dank of swamp-muck about you. Please, let me take a sample.

I could use your assistance when you get a moment.
Lovely to see you. I promise I'll try to stay... under control.
Talk to The Good Doctor

A little science should do just the trick.
That went much better than when I tried to upgrade myself.
Upgrade weapons

I hope your actions provide solace to the creatures Hyde has disturbed?
How I envy their simple nature.
Tame wildlife

This mayhem must come to an end!
Seems like we've put Hyde at bay... for now.
Revive a teammate

Hyde can be found as a Boss in the lowest level of The Lab.

Hyde mainly attacks by throwing Fire and Ice Flasks at the Players. These can be pretty dangerous if not evaded quickly as the Fire Flasks will cause Affliction damage and the Ice Flasks will slow you down. He will only use his Husks Grinder if they get close enough to him, However this attack isn't that dangerous as the damage is pretty weak.

Hyde starts off with VERY High defense, Making all attacks pitiful against him. In order to lower his towering defense and make him quicker to defeat, the Players must find 6 Energy Pylons around the arena and disable them by inserting 2 pieces of BluGlo in them. Doing so decreases his defense one at a time. Disabling all six will cause Hyde to briefly transform back into The Good Doctor and leave him defenseless and open for attacks untill he gets back up and morphs back into Hyde. 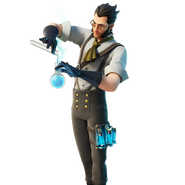 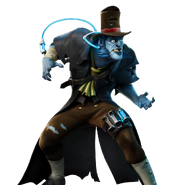 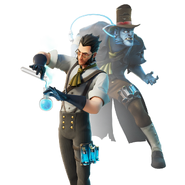 Promo in News Tab
An inner demon hungers to be released, will this doctors curiosity get the best of him? 10/29/2020
Community content is available under CC-BY-SA unless otherwise noted.
Advertisement