The Ice King is a Legendary Outfit in Fortnite: Battle Royale that could be obtained at Tier 100 of the Season 7 Battle Pass. He is part of the Ice Kingdom Set.

It's possible that The Ice King ruled over a kingdom before being frozen in Polar Peak. This is based on his name, the Unexpected Awakening loading screen, and the appearance of Polar Peak after being thawed.

Later in Season 7, it was revealed that The Prisoner had escaped the Polar Peak dungeon. It seems that he was imprisoned by The Ice King for an unknown reason. Soon, he reawakened his fire powers after being frozen for years.

Presumably to stop The Prisoner from releasing something that was frozen under Polar Peak, The Ice King modified a shard of The Cube, and used it to unleash the Ice Storm and summon the Ice Legion, an army of Ice Zombies, similar to the Cube Monsters. The Ice Queen seems to have been helping The Ice King. The Ice Legion did not last long...

The Prisoner was last seen in Wailing Woods before the Volcano appeared, and Season 8 began. The Prisoner has a connection to the Volcano, he is créator of Volcano

Tilted Towers and Retail Row were devastated, and had very few buildings remaining after the volcanic rocks hit. Polar Peak, however, was only cracked slightly.

This led to The Devourer being awoken in Season 9. The castle was carried on the monster's back and was destroyed in The Final Showdown. The fate of The Ice King and The Prisoner are unknown. 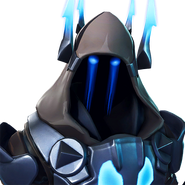 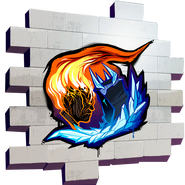 Season 7 Loading Screen
Add a photo to this gallery
Retrieved from "https://fortnite.fandom.com/wiki/The_Ice_King?oldid=170091"
Community content is available under CC-BY-SA unless otherwise noted.