The Prisoner is a Legendary Outfit in Fortnite: Battle Royale, that can be unlocked after completing 60 weekly Battle Pass challenges inside Season 7. He was also part of Season 8's story and created the Volcano after escaping Polar Peak. Then, soon afterward, he unleashed all his powers to destroy two locations in the map after The Unvaulting as well as crack the ice in Polar Peak in an attempt to awaken The Devourer.

The Prisoner has 4 unlockable styles with each edit style, showcasing his chains and locks being unlocked as well as unleashing his burning personality. Since he has bad relationships with The Ice King and uses a fire-themed revenge, many players have called him The Fire King. His flaming influence would later be passed to Ember in the Season 8 Battle Pass. 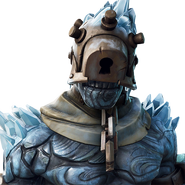 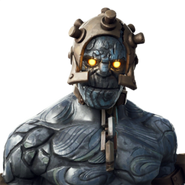 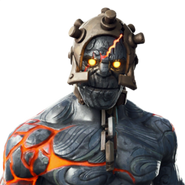 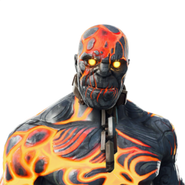 Stage 4 (Old)
Add a photo to this gallery
Retrieved from "https://fortnite.fandom.com/wiki/The_Prisoner?oldid=185074"
Community content is available under CC-BY-SA unless otherwise noted.