For the article on the the previous version of this location of the same name, please see The Convergence

40
The Pyramid was a named location in Fortnite: Battle Royale that was added in Update v18.40, and replaced The Convergence.

The Pyramid was a gigantic Rift Beacon pyramid made out of Cubes in the middle of the Island with a corrupted biome spreading from it. There were four support structures that make up the pyramid. In the center of the structure was The Cube Queen standing over her Golden Cube at the top of the pyramid structure. There were Cubes that retain their form, players could stand on their top and they are launched into the air. Below the structure was a pool of water from The Aftermath that has turned purple and became bouncy as a result from The Cube, similar to Loot Lake at the end of Season 5.

The Pyramid disconnecting from the Rift 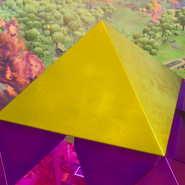