Fortnite Wiki
Register
Don't have an account?
Sign In
Advertisement
in: Legendary, Selectable Styles, The Seven,
and 10 more
English

The Scientist is a Legendary Outfit in Fortnite: Battle Royale, that could be unlocked by completing all the A Meteoric Rise Missions Challenges during the Season X Battle Pass. He is part of the The Seven Set.

The Foundation: I haven't had the time to read your latest study.

I haven't had the time to read your latest study.

The Paradigm: If you're saying something's up, I believe you.

If you're saying something's up, I believe you.

The Origin: You were right about her. I'm sorry.

You were right about her. I'm sorry.

The Visitor: Did the Origin apologize?

Did the Origin apologize?

The Imagined: Maybe we should team up more often.

Maybe we should team up more often.

The Foundation: I know you believe in the Paradigm. Others... Disagree.

I know you believe in the Paradigm. Others... Disagree.

The Origin: I told you. You're not getting the device back.

I told you. You're not getting the device back.

The Visitor: I'm staying out of your fight with the Origin.

I'm staying out of your fight with the Origin.

The Imagined: I'm going to help you bring her home.

I'm going to help you bring her home. 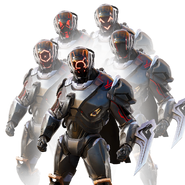 You still working for the blue guy?

You... want me to check the weather?

Yeah, I can see the future.

I refurbished these for you.

I refurbished these for you.

Please don't ask me to fix the monument again.
Wearing The Foundation

Our next threat won't be flying in on an airship.
Wearing The Origin

So you're thinking of settling down? I hear Sleepy's nice.
Wearing The Visitor

I owe you one for bringing her back.
Wearing The Imagined

Aah! Don't sneak up on me like that!
Wearing The Order

So... The Origin commandeered my device.

Were you able to intercept the signal?
Wearing The Imagined

You're wrong about her. The Paradigm is our only hope.
Wearing The Origin

Is it really you? You look... I mean, Uh. Good to see you.
Wearing The Paradigm

You and I both know we're not the Seven without our seventh member.
Wearing The Visitor

Your tactician is being a little... grudge-y, don't you think?
Wearing The Foundation

So about that statue... I'm assuming mine is still in the mail?
Wearing The Foundation

You're back?! We have so much to discuss!
Wearing The Paradigm

The Scientist is the engineer of The Seven, who is a self proclaimed "brilliant engineer, eccentric and sarcastic mastermind" He also refers to himself as the "handsomest member of The Seven".

He arrives at Athena by meteor, frozen in time above Dusty Depot. He creates several Rift Beacons around the map one at a time, swapping areas for alternate reality counterparts. He eventually started work on a rocket, which he would eventually use to contain the Zero Point and save The Bridge during The End live event.

The Scientist arrives at Apollo with The Visitor during the attack on The Last Reality, The Visitor covers him as he opens the Guava Fort Bunker to evacuate the Loopers, once done the Scientist tells to The Visitor to go on the "other side". He later accompanies the Loopers inside The Bridge to join The Foundation and Jones, however after joining them they are attacked by a Caretaker which caused the room to flood. The Scientist then made his way to Artemis.

The Scientist arrives on the Island as a Character, and also has quests for the player to complete. In these quests, he employs the help of The Looper for various tasks such as spying on the colony of Jonsey snapshots and destroying signal jammers put there by someone working against the Seven.

Audio logs made by the Scientist can be found detailing the Seven's relationship with The Paradigm. Throughout the weeks, we hear the Scientist's messages to the Paradigm, and the process of getting her to return to the Island.

As the war with the Imagined Order breaks loose, The Scientist begins upgrading all the Battle Buses he can get a hold of, currently working on one in Synapse Station. He is secretly working with The Imagined and The Paradigm.

Eliminate an IO operative to collect a data card

Find and protect The Black Box until the message is decrypted