The Vault was an Unnamed Location in Fortnite: Battle Royale that was added in Update v8.40. It is also an important location in the Lore of Battle Royale, being the former container for The Zero Point guarded by Singularity. It seems to be an artificial version of The In-Between. It was forcefully opened by The Mecha in The Final Showdown Event, exposing The Zero Point.

In Season 8, there were 5 Key Runes around Athena that needed a certain task to move and get to The Vault. After all the Runes got into their spots, the Vault opened.

This key required all players to hit it with a Harvsting Tool or other weaponry. It would dash forward a bit after a certain amount of damage, making its way across the Island until it finally inserted itself into The Vault.

This key had 3 laser-emitting orbs positioned around it. To insert this key, players had to work together to make each laser point at the key at the same time.

This key appeared near a checkered surface by the lake. To activate it, players had to make the squares form a specific color pattern.

The final key was in the Volcano. It required the players to dispense materials to get it to float higher and eventually reach the top.

Items and Cosmetics in The Vault 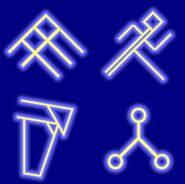 Break Open during The Final Showdown

Vaulted a Year Or More Promo

The Lobby of Impostors