The Visitor is a Legendary Outfit in Fortnite: Battle Royale that could be obtained after finishing 7 of the Blockbuster Challenges in Season 4.

The Visitor wears a blue retro-futuristic spacesuit which seems to be based off of spacesuit designs from the '80s. He has a black visor with red light designs, which may change with his emotions,and thoughts through his edit styles. Under his shoulder guards are bronze-colored plates with the logo shared by him and the rest of The Seven. He also has a blade on his wrist and a belt carrying what look like grenades and bullets.

The Visitor first arrived in Fortnite: Battle Royale in Season 4, from an unknown world. He came to the island in a metal space capsule embedded within a meteor. The purpose of the meteor was revealed in the Season X event (it was used to ram into The Zero Point).

Shortly after escaping the capsule in Week 7 and breaking out of the Dusty Divot research facility, he went to the Villain Lair near Snobby Shores and and used Hop Rocks to modify a movie prop rocket into a functioning time machine.

On June 30th, he launched the time rocket, starting the Blast Off event. It first climbed the air like a normal rocket, and halfway through its ascension it dropped its main thruster module, which fell into Anarchy Acres. It then sped up and reached the outer atmosphere. Strange noises could be heard from the rocket, and the following dialogue was heard:

The rocket turned downward, activated a targeting laser, and dove toward the island. This was to build up speed to open a Rift, a tear in Time and Reality. The rocket then emerged from a rift above Moisty Mire and flew around the map, eventually opening another rift near Greasy Grove. Finally, it opened one above Loot Lake, and blasted off to the sky to form an enormous long-lasting rift.

The Visitor was not seen again until Season X. This time, he came in the form of his counterpart from another

According to some theorists, Singularity may have been behind the mask of The Paradigm, and intentionally released the Zero Point from the Vault in order to begin this plan.

The Visitor and his six interdimensional counterparts, together known as The Seven, worked together to create the Rift Beacons, opening six rifts in the sky. During this time, the Scientist created several recordings of his voice. They were able to be collected and cryptically described his plans.

For the End event, he launched a second rocket into the sky, making a rift which activated six smaller rifts created by the Beacons. One by one, the seven Visitors arrived in their own rockets and worked together to teleport the frozen meteor into the Zero Point, causing it to reorganize the island's matter and create a new one. The Seven were never seen again, so far until Chapter 2: Season 2 where in the trailer on a tree, you could see 3 members of the seven and the other 4 unknown members. The visitor could be called the visitor because he was from a different timeline of Athena, the fortnite island, such as Apollo. 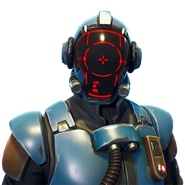 Old Icon
Add a photo to this gallery
Retrieved from "https://fortnite.fandom.com/wiki/The_Visitor?oldid=185080"
Community content is available under CC-BY-SA unless otherwise noted.