The Thermal Scoped Assault Rifle is an Assault Weapon in Fortnite: Battle Royale. It was introduced in Season 4. The Mythic version of this weapon is Huntmaster Saber's Thermal Rifle.

The Thermal Scoped Assault Rifle is a mid to long ranged semi-automatic weapon with a low zoom, thermal scope equipped. The Thermal Scope highlights opponents and containers at any range.

Medium Bullets. The Thermal Scoped Assault Rifle has a Headshot Multiplier of 2.0x.

From when it was last obtainable in Chapter 3: Season 2 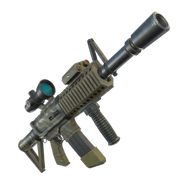 Icon Prior to Chapter 3: Season 2