Tilted Towers is a Named Location in Fortnite: Battle Royale that was added in Update v19.10. It is located at the south ofLoot Lake and far southwest of Coney Crossroads

Tilted Towers is a hamlet sized city made up of many buildings, a clock tower, apartments, an insurance office, shops, a mini soccer pitch (formerly the basketball court,) and a fishing pier. The Chapter 3 version of Tilted Towers is almost identical to its original counterpart, save for a few differences. Much of the location has been revamped - new buildings exist such as the coffee shop and the gas station, the crossroads can support vehicles like Cars and act as real drivable roads, and all buildings look newer due to Unreal Engine 5 which makes the location look more polished all-around. In addition to these changes, in the wake of Chapter 3: Season 2, the Imagined Order has occupied the city and has set up equipment and various kinds of ordinance virtually everywhere - including stationing an accessible blimp above the location.

A destroyed Apartment Building that used to have a secret hideout with equipment from The Seven.

A branch of the chain Big Shots, with IO equipment outside.

A mostly Blue house made of brick.

A destroyed Castle-like building that used to have branches of the chains The Pizza Pit and McGuffin's underneath the upper floors, which were still in construction.

A heavily damaged Clock Tower that has become a signature part of the image of Tilted Towers.

A building separated into dual parts at Tilted Towers.

A destroyed A Lot O' Auto garage at Tilted Towers.

A branch of the chain Knepley's Pawn Shop, with IO equipment outside.

A heavily-occupied No Sweat Insurance Building that is completely overrun by the Imagined Order.

A building with a branch of the Noms company and an apartment above.

A branch of the TACOS company.

A Twin building with various apartments and homes.

Tilted Towers is a named location formerly located nearby Loot Lake, Dusty Depot, Salty Springs, and Shifty Shafts - being a center location of the Battle Royale Map. It is one of the most popular locations of the island.

Prior to it's reintroduction, Tilted was in the island Athena, where there were a few differences to its newer version. For example, there was originally an Office building where No Sweat Insurance would stand. During Season 4, the Office building would be destroyed, and from Season 5 to 8, the site would be replaced with new buildings - a Sporting Goods shop, a News building, and then finally the No Sweat Insurance building once more. During The Unvaulting Event, Tilted Towers was hit and completely obliterated by rocks from The Volcano. Ironically, the No Sweat Insurance building was the only structure that survived the destruction, before the entire location itself was transformed in Season 9 into Neo Tilted. 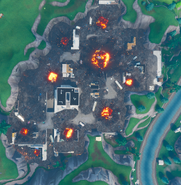 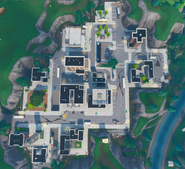 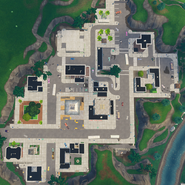