Torin is a Legendary Outfit in Fortnite: Battle Royale, that can be unlocked by purchasing all of the cosmetics on Page 8, and spending

9 Battle Stars of the Chapter 2: Season 8 Battle Pass. She is part of the Sidewayfarer Set.

Torin can be found as a Character at The Aftermath.

What do you want? I'm kinda busy.

If you wanna use those Bars for good, I have some research projects...

Anything new to report from the Sideways?

You're joining the hunt? Good. 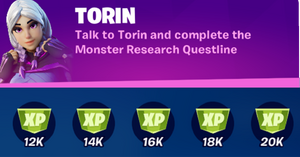 You think you can handle the Sideways? Prove it.
Call yourself a hunter if you want, but we're the ones being hunted.
Enter The Sideways

The weapons in there? They're powerful. I'd grab one, if you can.
Don't point that thing at me.
Collect a Sideways Weapon

Sideways weapons have a real kick to 'em. Get used to it.
... Maybe you'll be useful in this hunt after all.
Damage players with a Sideways Weapon

This is it. It's time to prove yourself as a hunter.
Huh. You survived. Good work.
Eliminate Cube Monsters in The Sideways

If you can manage a full hunt, I'll be really impressed.
Fine. If you don't ask any personal questions... you can join my hunt.
Complete a Sideways encounter 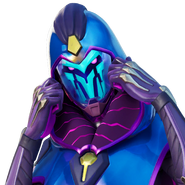 Torin's "Sideways Warrior" style in the Chinese version of Fortnite.