Travis Scott is an Icon Series Outfit in Fortnite: Battle Royale, that can be purchased in the Item Shop for

1,500 V-Bucks or with the Astronomical Bundle for

2,500 V-Bucks. He was first released in Chapter 2: Season 2 and is part of the Travis Scott Set in collaboration with Travis Scott. 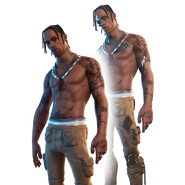 A teaser image for the Travis Scott's Astronomical event