Drop in to a New World

Heal your squad with the Bandage Bazooka, carry your fallen teammates to safety, and celebrate with new group emotes like high fives!

Hide in Haystacks and Dumpsters to get the drop on your opponent or go in blazing by blowing up gas tanks and explosive barrels.

Get back to basics and battle enemies with a streamlined weapon arsenal. Upgrade weapons using resources at the Upgrade Bench.

Level through an all new Battle Pass featuring a brand new XP system and Medals you earn in match. 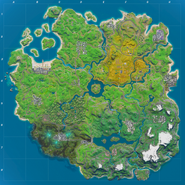 Drop in to a New World