It turns out the Aliens have more to their fleet than we thought. First the Mothership, then the Saucers, and now… Abductors? We think that might be what the Aliens call them, as the IO seems to use this term regularly.

We’ve put together some more files for all you to look at. (See attached.) 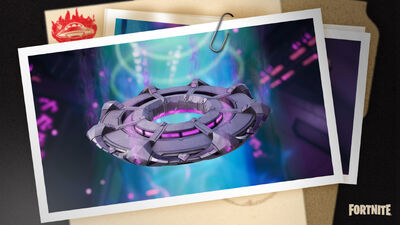 Abductors hover over certain places and... kind of just stay put. But only for a little while. After some time, it’ll send beams at the ground, taking away those who decide to walk in them. Some who claim to have been abducted say they were taken to the Mothership, but we don’t know what the Aliens would have to gain. Why let people see the Mothership then bring them back home?

In any case, there seems to be more in it for the abductees than the Aliens. After returning, abductees tend to come back with powerful weapons. “The more orange-looking orbs we were able to collect in the Mothership, the better stuff we were allowed to leave with,” one abductee says. “We could even extend the time limit if we found orbs with the little clocks on them.”

You can see the locations of Abductors on your map. They visit in cycles, so we recommend investigating them thoroughly each time they’re here. Because Abductors only have so much space, there’s a capacity as to how many one can abduct at once. 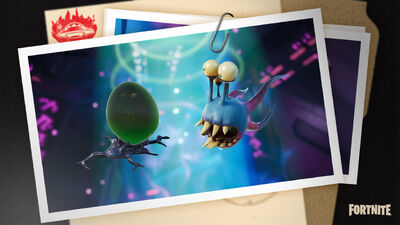 It makes sense that Aliens would have their own version of wildlife. And it looks like their wildlife is very keen on ours. The Aliens have unleashed a parasitic species on the Island, introducing a new danger to the ecosystem. However, they’re actually more helpful than the Aliens probably intended.

Known simply as Parasites, if one of these mini-Aliens attach to your head, they’ll drain your Health down to 60. (Shield remains unaffected.) But this relationship is more give-and-take than it seems. Not only do they protect you from headshot damage, but they also make you run faster and jump higher. Parasites have an aversion to water, fire, and, unsurprisingly, attacks.

These creatures can often be seen parasitizing chickens, boars, and wolves. If you take damage from parasitized wildlife, their slime will gradually deplete some of your Health. Defeating an animal with a Parasite on it will make that Parasite jump on you, which could very well be a sound strategy. We expect their population to grow as they adapt to the Island.

What else is new in Fortnite Battle Royale in v17.10:

In a decisive blow against the Alien invaders, the Imagined Order has hacked their flying Saucers. The rate of fire on their ship’s plasma barrage has been reduced, allowing for a bigger window to counter-attack and shoot them right out of the sky!

In response to their Saucers being hacked, the Aliens have retaliated against the IO. Recon Scanners now take additional time to recharge, and the lifetime of Recon Bolts has been reduced. 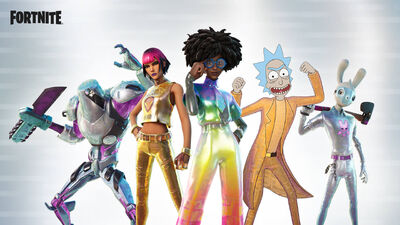 Reached Level 100 and looking for more shine? Silver, Gold, and Prismatic pages have been added to the “Bonus Rewards” Battle Pass section for Sunny, Guggimon, Zyg, Doctor Slone, and Rick Sanchez. Even past Level 100, you’ll continue to earn Battle Stars to unlock new Styles for your favorite Battle Pass Characters!

Brutus is on vacation and has arrived in Believer Beach as Beach Brutus, Human Bill arrived at Steamy Stacks and Joey now will occasionally appear at Believer Beach to check out the Party.

New type of Characters has been added, they would heal you for emoting with them; Go dance with them!

Be careful with who you talk to in the island, it may not be who you think it is; It is rumoured that undercover Aliens have taken the skin of multiple people in the Island, they sell a Ray Gun and may attack you if you blow their disguise!

Zyg and Choppy have arrived in Hydro 16, rumour is that when they are defeated they will drop a Mythic Ray Gun! But beware, they are agressive and won't go down without a fight.

Fortnite’s v17.10 update is here and new Invasion tech including the Kymera Ray Gun, Rail Gun, and Pulse Rifle are coming to Fortnite Creative. We’re also adding a few community requested weapons and some bits and pieces that we just plain missed before!

Check out the full slate of updates below.

Things are about to get reel! The Fishing Zone gets a major update with three different loot modes. This includes a custom device inventory and the ability to fish almost anywhere!

Damage Volume is the latest device to be reborn in prop form, so now you can bring the pain in pretty much any direction you want. Read more details for the Damage Control Device on the Fortnite Creative Documentation website.