Valor is a Legendary skin from the Season 4 Battle Pass at Tier 71.

Her hair is a mixture of purples and reds. She has a high ponytail with a red and silver embellishment. Her neck is covered by a red and silver neck piece which connects to her arm bands. Her skirt is a dark gray and a lighter gray in a striped layer, presumably to look like feathers of a bird. Her forearms are covered by gloves which has silver lining and a red jewel in the center of the back of her hand. Her boots are mainly red and on her shins there is a what appears to be a falcon's beak and wings. 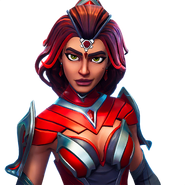 Old Icon
Add a photo to this gallery

Retrieved from "https://fortnite.fandom.com/wiki/Valor?oldid=184532"
Community content is available under CC-BY-SA unless otherwise noted.